Alex sistemi SpA has designed, manufactured and tested a new version of the GCS shelter system for Falco UAV which is being used by the Selex Galileo Company for operating Falco UAV in Middle East.

At the beginning of 2011, a meeting between the manager of the Space & Defence Business Unit of Alex sistemi SpA and representatives of the Engineering Unit of Selex Galileo took place in Ronchi dei Legionari. As the result of the meeting, a programme was launched for the development, production and testing of a new UAV Falco GCS housed in a MIL ISO-STD 20 ft. air-transportable shelter system.

Falco is a tactical UAV System, designed and manufactured to supply Command and Control net-centers with a tactical overview of the operational scenario and target cueing in real time. Designed as a system driven by the ground plane, the Falco unmanned aircraft is a new concept, suited to meet the new requirements of civil and military area patrolling. Falco is the result of the most advanced technology in the field. The air vehicle length is 5.25 meters and its wing span is 7.20 meters. UAV Falco has a propeller propulsion system and has a top speed of 40 m / sec. The fact that its max payload is 70 kg means that it can include a multispectral electro-optical sensor or surveillance radar.

Selex Galileo is ready to market Falco. When equipped with the appropriate sensors, it becomes an optimal system to meet the various needs of area surveillance, in relation to fires and pollution, border control and illegal immigration, verification of environmental disasters for coastal surveillance and research to aid the identification and classification of targets. In short, it is versatile and flexible with extremely competitive operating costs.

The military version of FALCO is now being considered for use in the remote-controlled system, Mirach 26, which is currently used by the Italian military. It is also advertised in the international market for the Tactical Unmanned Aerial Vehicle (TUAV surveillance) system and MAE (Medium Altitude Endurance).

The shelters and related equipment and fittings in the Ground Control Stations (GCS) for UAV Falco as well as the ISO-STD 20 ft. shelters AGE, VLV and GDT have been designed, manufactured and tested in the Alex sistemi SpA factories in Ossona (MI). The GCS is housed in a 20 ft ISO-STD shelter, which can be transported by C-130 aircraft. The shelter is equipped with a self-loading system. The GCS is fitted with a rack and cabinets as well as air conditioning and ventilation systems, a switchboard, lighting system and multi-functional control panel for pilots and a chief of staff developed and manufatrured by Alex sistemi SpA.

The new version of the Falco GCS shelter is equipped with an interface electrical panel which has two transformers, one of which is 35 kVA, and two inverters for 5.5 kW each. The electrical panel is designed to provide power to the system in accordance with Saudi Arabian standards (460V – 60Hz).

The final product is highly integrated and is the result of advanced technology, providing further evidence of the constant increase in the operational capacity of Alex sistemi SpA In addition, the programme provided another opportunity to confirm the high level of expertise and know-how of the company that enables it to satisfy the strict requirements of the defence sector.

A miracle? It took Alex sistemi SpA less that 50 working days to design, manufacture, test and certify the final product. 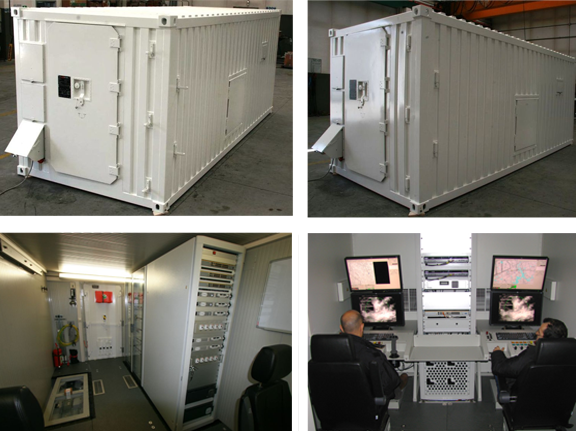