Selex Galileo trusted Alex sistemi SpA with the design and manufacture of the tented logistical units for the Mirach 100/5 supporting camp in Saudi Arabia.

After the successful design, manufacture and certification of the ISO-STD 20 ft. shelter system for housing the Mirach 100/5 GCS (Ground Control Station) for Selex Galileo, Alex sistemi SpA delivered an inflatable tent with an integrated logistical unit solution to the Finmeccanica Company, which works in the defence sector, for use in field operations in Saudi Arabia.

The Mirach 100/5 is a high performance, reusable Aerial Target System threat simulator. It manages up to eight targets simultaneously in a realistic training scenario and simulates multiple threats flying at high subsonic speeds. Designed and developed by Galileo Avionica, the Mirach 100/5 is a state-of-the-art aerial target system for antiaircraft missile firing practice and weapon system qualification and is in service at all major European firing ranges. It is also used by NATO Armed Forces and other international customers.

The Mirach 100/5 Aerial Target System simulates most of the present-day threats and their performances, including very-low-altitude sea skimming missions, tight formation flights and 3D manoeuvres up to instantaneous 8g sustained load factors, covering a flight envelop between 3 and 12.000 metres above sea level and maximum speed up to. 0.85.

At the end of July 2011, Selex Galileo technical specialists visited Alex sistemi SpA factories to see the suggested tent shelter solutions which can be used to support military operations and field training exercises. Selex Galileo specialists chose the inflatable tent with four arches and four doors for housing repair and maintenance unit. This solution is suitable for both emergency repairs and for use in long-term camp; the tent is easily deployed by one person within five minutes.

The tent solutions for GCSs and mobile command and control stations for the Mirach 100/5 programme, designed, manufactured and tested by Alex sistemi SpA, are multifunctional. The field tent shelter system purchased by Selex Galileo is equipped with an automatic electric blower system for maintaining the internal pressure as well as air-conditioning and lighting and electric systems. It is also equipped with the necessary technical field equipment and the flooring with adjustable levels for use in hot areas. 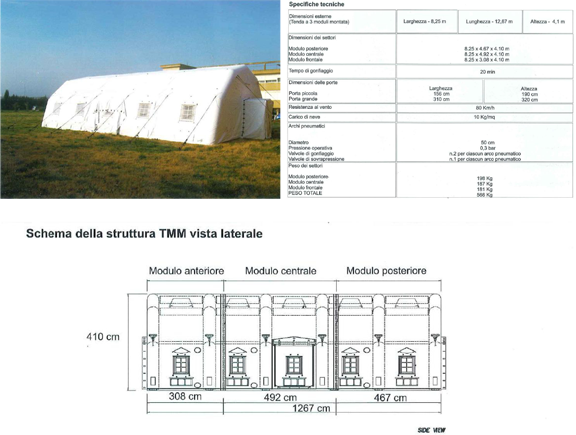