“Great Man Made River Project”, “the eighth wonder of the world”!

Alex sistemi SpA has began an active collaboration with the ” Great Man Made River Agency” for the development and realization of the pharaonic project of the artificial river for bring water to all the Libyans. This collaboration has started in the 1988 and is still continuing, Alex sistemi SpA has supplied more then 750 Passive Shelter in this years and is now working for the new Phase of the project. This project is called “Great Man Made River Project” and consist in the extraction of water from underground at a deep of 300-400 meters in the southern part of the desert and canalize it towards the coast.
Alex sistemi SpA is the main supplier for all the Passive Shelter and electrical equipment necessary for the functioning of the extraction’s pumps.

Here will follow a presentation of this Project.
Libyans like to call it “the eighth wonder of the world”.

After weighing up the relative costs of desalination or transporting water from Europe, Libyan economists decided that the cheapest option was to construct a network of pipelines to transport water from the desert to the coastal cities, where most Libyans live.

In August 1984, the foundation stone for the pipe production plant at Brega was laid. The Great Man-made River Project had begun. Libya had oil money to pay for the project, but it did not have the technical or engineering expertise for such a massive undertaking. Foreign companies from South Korea, Turkey, Germany, Japan, the Philippines and the UK were invited to help. 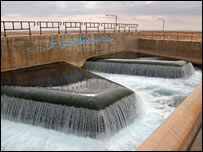 Phase III which links the first two Phases is still under construction.

Adam Kuwairi, a senior figure in the Great Man-Made River Authority (GMRA), vividly remembers the impact the fresh water had on him and his family.

To get an idea of the scale of the Great Man-Made River Project, you have to visit some of the sites.

The Grand Omar Mukhtar will be Libya's largest man-made reservoir

Libya is opening up, but it’s still hard for foreign journalists to get visas. We had to wait almost six months for ours; but once we arrived in Libya, Libyans were eager to tell us about the project.
They took us to see a reservoir under construction at Suluq. When it’s finished, the Grand Omar Mukhtar will be Libya’s largest man-made reservoir. Standing on the floor of such a huge, empty space is an awesome experience. Concrete walls rise steeply to the sky; tarring machines descend on wires to lay a waterproof coating over the concrete. Further west along the coast is the Pre-Stressed Concrete Cylinder Pipe factory at Brega. This is where they make the 4m-diameter pipes that transport water from the desert to the coast. 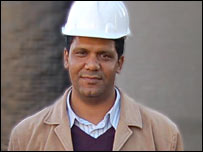 Libyans are gaining experience and know-how, and now more than 70% of the manufacturing is done by Libyans

It’s a modern, well-equipped factory, built specially for the Great Man-Made River Project. So far, the factory has made more than half a million pipes. The pipes are designed to last 50 years, and each pipe has a unique identification mark, so if anything goes wrong, engineers can quickly establish when the pipe was made. The engineer in charge of the Brega pipe factory is Ali Ibrahim. He is proud that Libyans are now running the factory: “At first, we had to rely on foreign-owned companies to do the work. “But now it’s government policy to involve Libyans in the project. Libyans are gaining experience and know-how, and now more than 70% of the manufacturing is done by Libyans. With time, we hope we can decrease the foreign percentage from 30% to 10%.”

With fossil water available in most of Libya’s coastal cities, the government is now beginning to use its water for agriculture. Over the country as a whole, 130,000 hectares of land will be irrigated for new farms. Some land will be given to small farmers who will grow produce for the domestic market. Large farms, run at first with foreign help, will concentrate on the crops that Libya currently has to import: wheat, oats, corn and barley. Libya also hopes to make inroads into European and Middle-Eastern markets. An organic grape farm has been set up near Benghazi. Because the soil is so fertile, agronomists hope to grow two cereal crops a year.

It is hard to fault the Libyans on their commitment. They estimate that when the Great Man-Made River is completed, they will have spent almost $20bn. So far, that money has bought 5,000km of pipeline that can transport 6.5 million cubic metres of water a day from over 1,000 desert wells.

As a result, Libya is now a world leader in hydrological engineering, and it wants to export its expertise to other African and Middle-Eastern countries facing the same problems with their water. Through its agriculture, Libya hopes to gain a foothold in Europe’s consumer market. But the Great Man-Made River Project is much more than an extraordinary piece of engineering.

Adam Kuwairi argues that the success of the Great Man-Made River Project has increased Libya’s standing in the world: “It’s another addition to our independence; it gives us the confidence to survive.”

Of course, there are questions. No-one is sure how long the water will last. And until the farms are working, it’s impossible to say whether they will be able to deliver the quantity and quality of produce for which the planners are hoping.

But the combination of water and oil has given Libya a sound economic platform. Ideally placed as the “Gateway to Africa”, Libya is in a good position to play an increasingly influential role in the global economy.